David Joy was born in Charlotte, North Carolina, in 1983. Joy moved to Cullowhee, North Carolina in 2003 to study English at Western Carolina University. He received a BA in Literature in 2007 and an MA in Professional Writing in 2009. Joy finished ‘Growing Gills’ as a graduate student. He received the 2009 Outstanding Scholar Award for his graduate research, and later received the inaugural Karen Nicholson Best Thesis Award for his work on ‘Growing Gills’. 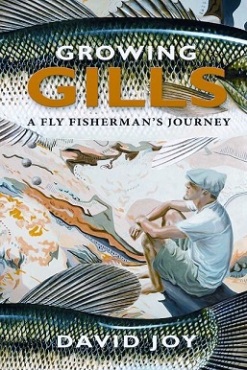 In ‘Growing Gills: A Fly Fisherman’s Journey’, David Joy uses his obsession with fly fishing as a way to delve into himself. Through his deep connection to the natural world, Joy reveals why he is inherently defined by fish and water. The youngest in a family of fishermen, Joy has been exposed to the passion of casting lines since an early age. Yet as he grows older, he finds that the influence and necessity of the piscine world take on a new role in his life.

“Joy gives a great deal of detail about the technique of fishing – this is a world of ‘Woolly Worms’, ‘Parachutes Adams’ and ‘Pheasant Tails’ – yet he never bores, never gets lost in the details. Like a skilful story-teller who knows when to give the reader setting and when to get on with driving the story onwards, so Joy keeps the momentum going by mixing up moments of  technical knowledge with the tales themselves.”

“Growing Gills is beautifully written with poetically descriptive language that will let any reader visualize the beauty the author is experiencing. This book could easily be named “The Zen of Fishing” or “The Tao of Fishing.” Even the title “Growing Gills” expresses a oneness with the fish (and nature) that David feels while fishing.”

AVAILABLE AT THE FOLLOWING EBOOK RETAILERS:

This entry was posted in Uncategorized and tagged fishing, fly fishing, memoirs, nature. Bookmark the permalink.