“All Change Please” is a thought-provoking yet humorous look into the lives of three best friends, Ophelia, Kat and Elise, who simultaneously come to a crossroads. In an unexpected twist of fate, their lives are turned upside down when a close friend is suddenly killed, the impetus that will shake the women at their foundations. Together, they endure several months of sorrow and must decide what it is they need to do in order to get out of the hole that is their existence in London.

See what readers are saying on GoodReads!

Originally from Boston before moving to Toronto and then to London, Danielle West has lived in forts in the woods, cardboard boxes, and in fancy high-rise flats. West has been a go-go dancer for Boston punk bands, helped start the UK’s first roller derby league, owned her own soap making company, and eventually embarked on a professional mixed martial arts career. Over time, West began penning what would become ‘All Change Please,’ her first published novel, written entirely on her Blackberry smartphone over the course of seven years. 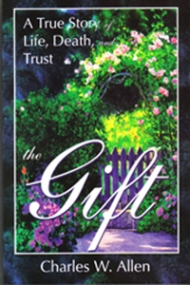 Charles Allen, loving husband and father in a family of eight, shares his personal experience of conquering the heartache and tragedy of losing two children to cystic fibrosis, and both his oldest daughter and wife to cancer.
Through the details of Allen’s experiences of coping with the loss of four family members, it becomes clear how tragedy can become a powerful source of personal growth and how faith plays an important role in the trials and tribulations of life. Allen’s mourning culminates with the selfless gift given to him by his wife, Sue, as she struggles with her last breath.
Through touching personal journal entries and revealing narrative, ‘The Gift’ chronicles one man’s one man’s struggles with, and triumph over, loss and grief.

“Once in a great while, a story touches you so deeply that it changes you forever,
a timeless story that will never grow old.”